Employment changes by industry in April 2010 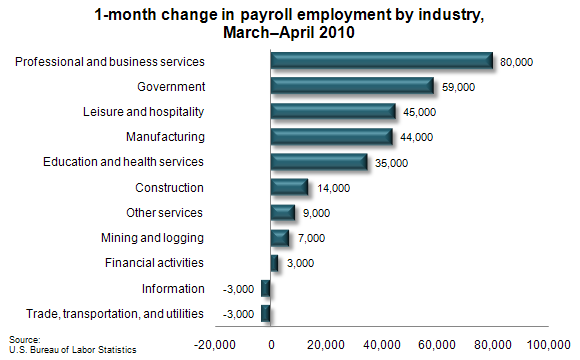 Federal government employment was up in April, reflecting the hiring of 66,000 temporary workers for the decennial census.

Leisure and hospitality gained 45,000 over the month. Much of this increase occurred in accommodation and food services, which added 29,000 jobs.

Employment in transportation and warehousing fell by 20,000 in April, reflecting a large decline in courier and messenger services.

These data are from the Current Employment Statistics program. These data are seasonally adjusted, and data for the most recent two months are preliminary. To learn more, see "The Employment Situation – April 2010," (HTML) (PDF) news release USDL-10-0589.