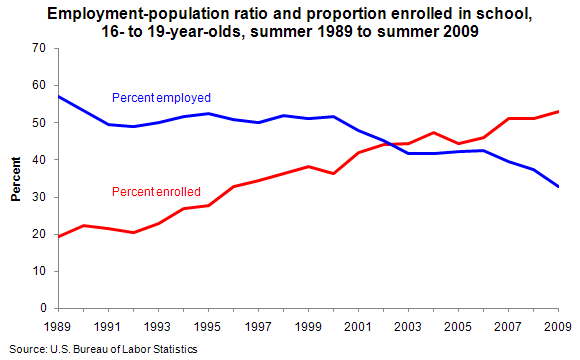 Teens who are enrolled in school are much less likely to hold jobs in the summer than are youths who are not enrolled. The employment-population ratio for enrolled youths was 25.5 percent in summer 2009, compared with 41.3 percent for nonenrolled youths.

In addition to higher summertime enrollment rates, a second possible reason for lower employment-population ratios among teens is that students are facing greater academic demands and pressures than in the past, which, together with the desire to achieve, may incline them toward placing greater emphasis on academics than on working.

The recent declines in summer employment rates among teens have been large and unprecedented, and have occurred across all major demographic groups.

These data are from the Current Population Survey. To learn more, see "The Early 2000s: a period of declining teen summer employment rates," (PDF) in the Monthly Labor Review, May 2010 issue.