During the first quarter of 2010, nonfarm business sector labor productivity—as measured by output per hour—increased at a 2.8 percent annual rate, with output rising 4.0 percent and hours rising 1.1 percent. Nonfarm business productivity growth was revised down to 2.8 percent from the 3.6 percent preliminary estimate, reflecting a downward revision to output and an upward revision to hours. 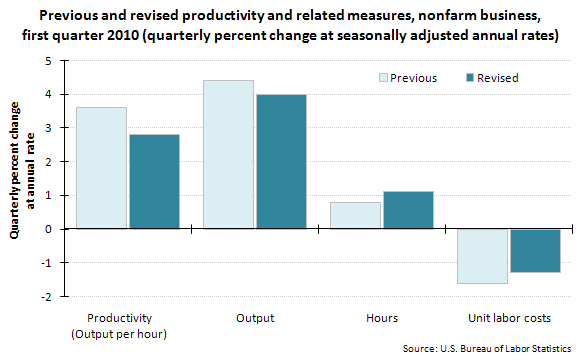 These data are from the BLS Productivity and Costs program. Data in this report are seasonally adjusted annual rates. These estimates are subject to revision. Additional information is available in "Productivity and Costs, First Quarter 2009, Revised" (HTML) (PDF), news release USDL-10-0747. Labor productivity, or output per hour, is calculated by dividing an index of real output by an index of hours of all persons, including employees, proprietors, and unpaid family workers. The revised measures were based on more recent source data than were available for the preliminary report.