Employment changes by industry in May 2010

Total nonfarm payroll employment grew by 431,000 in May, reflecting the hiring of 411,000 temporary employees to work on Census 2010. Total private employment showed little change over the month (+41,000), following increases in March and April. 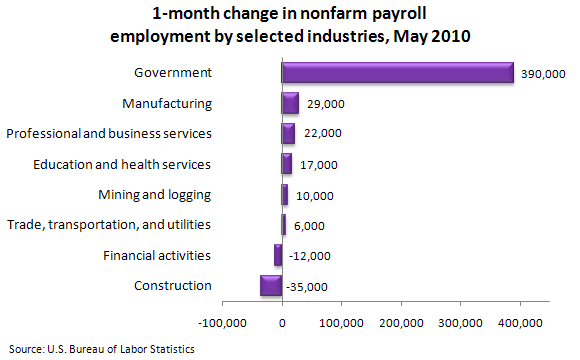 Temporary help services added 31,000 jobs over the month; employment in the industry has risen by 362,000 since September 2009.

Employment in mining continued to increase in May, with a gain of 10,000. Support activities for mining accounted for 8,000 of the over-the-month increase. Since October 2009, mining employment has expanded by 50,000.

In May, employment in construction declined by 35,000, largely offsetting gains in the industry in the prior 2 months. May's job loss was spread throughout the sector.

These data are from the Current Employment Statistics program. The data are seasonally adjusted, and data for the most recent two months are preliminary. To learn more, see "The Employment Situation – May 2010" (HTML) (PDF), news release USDL-10-0748.