From May 2009 to May 2010, nonfarm payroll employment decreased in 39 states and increased in 11 states and the District of Columbia. 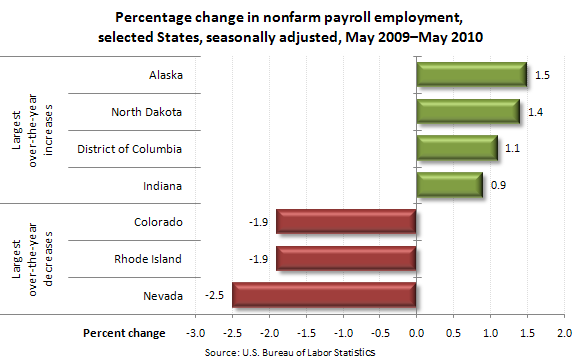 The largest over-the-year percentage decrease in employment was reported in Nevada (‑2.5 percent), followed by Colorado and Rhode Island (‑1.9 percent each), and California, Georgia, and New Mexico (‑1.7 percent each).

These data are from the Current Employment Statistics (State and Metro Area) program and are seasonally adjusted. To learn more, see "Regional and State Employment and Unemployment — May 2010" (HTML) (PDF), news release USDL 10-0815.