In May, employers took 1,412 mass layoff actions that resulted in the separation of 135,789 workers, seasonally adjusted, as measured by new filings for unemployment insurance benefits during the month. 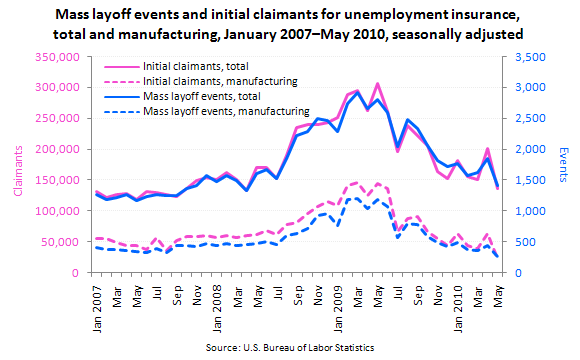 Within the manufacturing sector, 266 mass layoff events were reported in May, seasonally adjusted, resulting in 22,577 initial claims. Both figures declined over the month to their lowest levels in program history.

These data are from the Mass Layoff Statistics program. December 2007 was the start of a recession as designated by the National Bureau of Economic Research. Each mass layoff action involved at least 50 people from a single employer. To learn more, see "Mass Layoffs—May 2010" (HTML) (PDF), news release USDL-10-0856.