Employer compensation costs for production workers in manufacturing increased between 1975 and 2007 in all countries included in a recent BLS study. 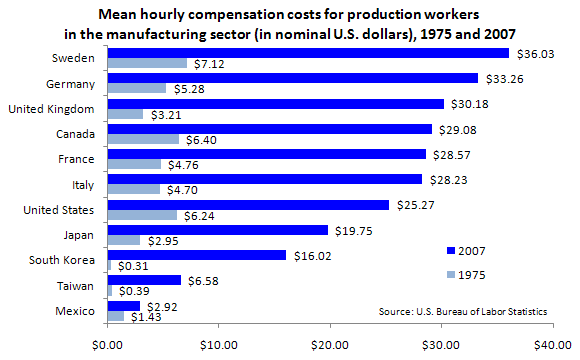 Because these compensation cost measures are nominal—not adjusted for inflation—the steady increase over time is attributed primarily to a rise in the overall price level.

Although nominal labor costs in U.S. dollars have risen across the board over the long term, trends in growth rates have varied considerably from country to country. The mean hourly compensation cost quadrupled in the United States, from $6.24 in 1975 to $25.27 in 2007, an average increase of 4.5 percent per year.

South Korea showed the largest percentage change in hourly compensation costs, increasing from $0.31 in 1975 to $16.02 in 2007—an average increase of approximately 13 percent per year. Conversely, compensation cost growth in Mexico was sluggish over the long term; the mean cost increased from $1.43 in 1975 to only $2.92 just over 30 years later—an average annual increase of 2.3 percent.

These data are from the International Labor Comparisons program. To learn more, see Compensation costs in manufacturing across industries and countries, 1975–2007 (PDF), in the June 2010 issue of the Monthly Labor Review. Production workers generally include those employees who are engaged in fabricating, assembly, and related activities.