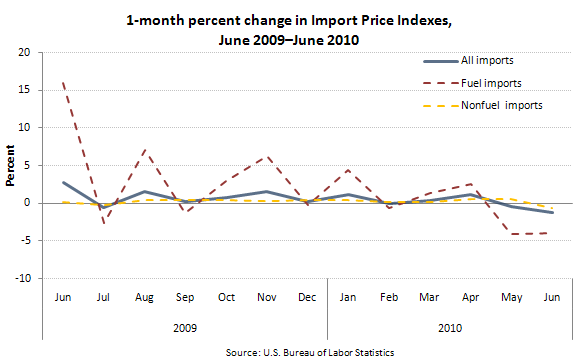 In June, prices of U.S. imports fell 1.3 percent, after a 0.5-percent drop the previous month. The decrease was the largest monthly decline since a 1.3-percent decline in January 2009, which was also the last time the index fell in consecutive months. Despite the recent declines, import prices advanced 4.5 percent for the year ended in June.

Import fuel prices fell 4.0 percent in June, after a similar 4.1-percent decrease in May. The June decline was led by a 4.4-percent drop in petroleum prices and was the largest monthly decrease for that index since a 4.6-percent drop in January 2009. Partially offsetting the decline in petroleum prices, natural gas prices rose 1.5 percent in June. Despite the recent decreases, overall fuel prices increased 11.6 percent over the past year.

In June, the price index for import prices excluding fuel fell 0.6 percent, the first monthly decline since a 0.2-percent decrease in July 2009 and the largest since a 0.6-percent drop in March 2009. A 1.5-percent downturn in nonfuel industrial supplies and materials was the largest contributor to the June decline. For the 12 months ended in June, nonfuel import prices advanced 2.8 percent. 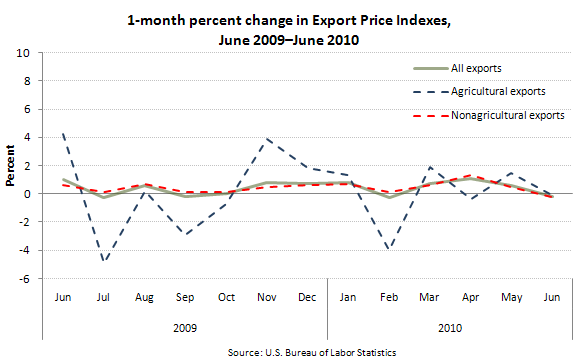 Export prices fell 0.2 percent in June, following increases in each of the previous three months. Most of the decline was attributable to falling nonagricultural prices, although agricultural prices also declined. The price index for overall exports rose on a 12-month basis in June, increasing 4.3 percent.

In June, prices for agricultural exports edged down 0.1 percent, after a 1.5-percent increase in May. The decrease was led by a 4.9-percent fall in corn prices and a 7.2-percent drop in wheat prices. Agricultural prices decreased 2.8 percent for the year ended in June.