Employers initiated 1,851 mass layoff events in the second quarter of 2010 that resulted in the separation of 338,064 workers from their jobs for at least 31 days. Over the year, both events and separations decreased sharply from program-high second quarter levels (with data available back to 1995). 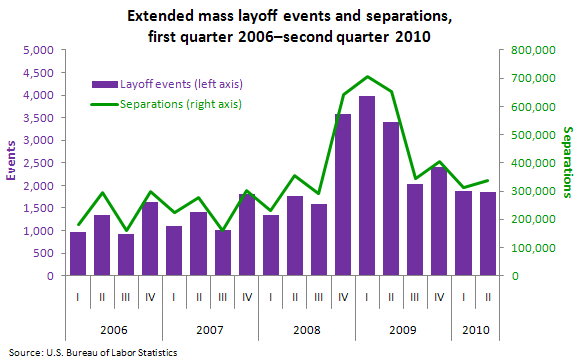 Manufacturing accounted for 16 percent of private nonfarm extended layoff events and 15 percent of related separations in the second quarter of 2010, the lowest proportions for any quarter in program history. Fifty-six percent of employers reporting an extended mass layoff during the quarter indicated they anticipated some type of recall, up from 37 percent a year earlier. Over the year, the percentage of initial claimants who were women increased from 42 percent to 51 percent during the quarter.

In second quarter 2010, the average size of a layoff (as measured by separations per layoff event) was 183, the smallest second quarter average size in program history. Events were primarily concentrated at the lower end of the extended layoff size spectrum, with 67 percent involving fewer than 150 workers, up from 64 percent a year ago; 7 percent of the events involved 500 or more workers, the highest proportion since second quarter 2006.