In July, Nevada again reported the highest unemployment rate among the States, 14.3 percent. The rate in Nevada also set a new series high. All State series begin in 1976. 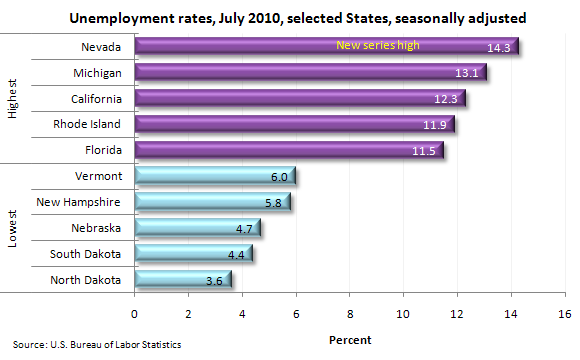 The States with the next highest unemployment rates were Michigan, 13.1 percent, and California, 12.3 percent.

In total, 25 States posted jobless rates significantly lower than the U.S. figure of 9.5 percent, 7 States had measurably higher rates, and 18 States and the District of Columbia had rates that were not appreciably different from that of the Nation.

Nevada recorded the largest jobless rate increase from July 2009 (+2.0 percentage points). Three additional States had smaller, but also statistically significant, increases. Eight States reported significant over-the-year rate decreases in July, the largest of which was in Minnesota (‑1.5 percentage points). The remaining 38 States and the District of Columbia registered unemployment rates that were not appreciably different from those of a year earlier.

These data are from the Local Area Unemployment Statistics program and are seasonally adjusted. Data for the most recent month are preliminary. To learn more, see "Regional and State Employment and Unemployment — July 2010" (HTML) (PDF), new release USDL-10-1144.