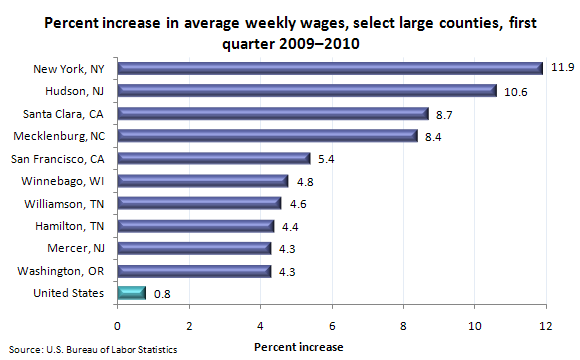 San Mateo, California (part of the San Francisco area), led the Nation in average weekly wage decline, with a loss of 17.7 percent over the year. In the county, manufacturing had the largest over-the-year decline in average weekly wages (‑58.2 percent), which resulted from a large payout related to an acquisition in first quarter of 2009.

These earnings data, which are from the Quarterly Census of Employment and Wages, are preliminary and subject to revision. The largest counties are determined by 2009 annual average employment levels. To learn more, see "County Employment and Wages: First Quarter 2010" (HTML) (PDF) news release USDL–10–1449.