Some occupations are more likely than others to have employment concentrated in specific areas. In 2009, 89 percent of political scientists worked in just a few areas—including more than two-thirds in the Washington, D.C., metropolitan area. 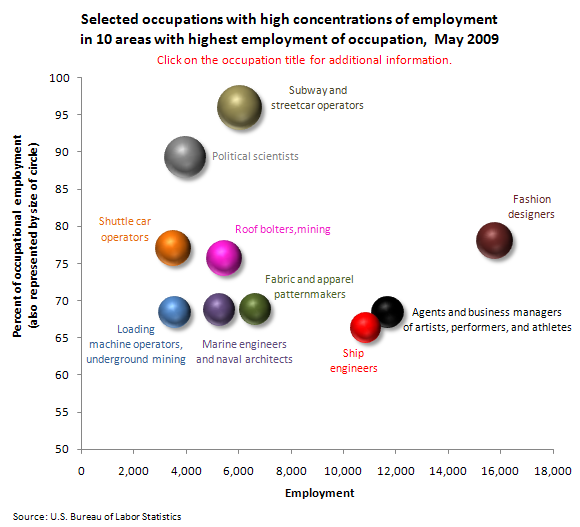 Occupational concentration often corresponds to population. For example, people who live and work in densely populated areas have a greater need for public transportation. In 2009, nearly all subway and streetcar operators—96 percent—were employed in just 10 metropolitan areas.

The natural resources or physical features of a locale can also determine occupational concentration. Several occupations associated with water transportation are concentrated in areas near waterways and coasts, such as Seattle, Virginia Beach, and New Orleans. In 2009, 68.7 percent of marine engineers and naval architects, as well as 66.3 percent of ship engineers, were employed in only 10 metropolitan areas.

Other occupations with high geographic concentrations include those related to fashion and entertainment. In 2009, New York and Los Angeles were among the 10 metropolitan areas with high concentrations of employment in apparel- and entertainment-related occupations—fashion designers (78.0 percent), fabric and apparel patternmakers (68.8 percent), and agents and business managers of artists, performers, and athletes (68.4 percent).

These data are from the BLS Occupational Employment Statistics program. To learn more, see "Mapping out a career: An analysis of geographic concentration of occupations," in the Fall 2010 edition of the Occupational Outlook Quarterly.