Export price index rose 5.8 percent over the past year 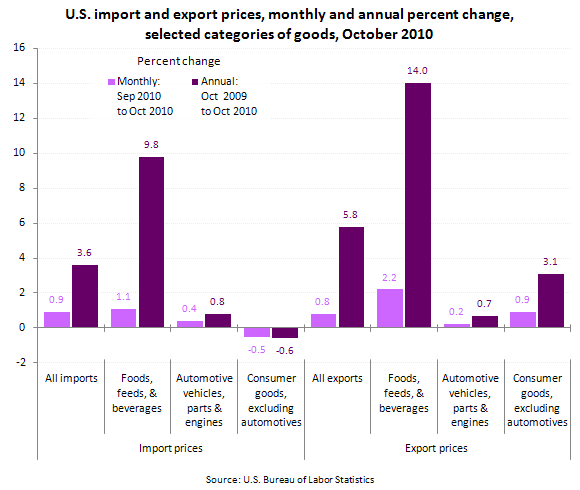 Export prices increased 0.8 percent in October following similar advances of 0.6 percent and 0.8 percent in September and August, respectively. Higher prices for agricultural and nonagricultural exports contributed to the increases in each of the three months. Prices for consumer goods and automotive vehicles rose in October, increasing 0.9 percent and 0.2 percent, respectively.

The price index for overall imports increased 0.9 percent in October, the largest monthly advance for the index since a 1.1-percent advance in April. The October rise was also only the second one-month upturn since the April increase. Despite the downward trend between May and September, import prices rose 3.6 percent over the past 12 months.

Import prices for automotive vehicles rose 0.4 percent in October, an increase that was in part attributable to year-end model changeovers. In contrast, consumer goods prices fell 0.5 percent, led by falling prices for medicinal, dental, and pharmaceutical products and household goods.