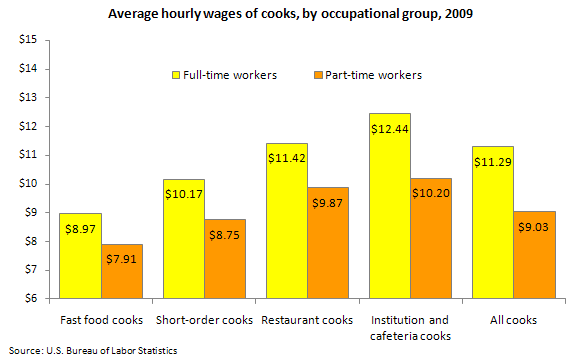 More than 2 million workers (1.5 percent of the workforce) are employed as cooks, which include fast food cooks, short order cooks, restaurant cooks, and institution and cafeteria cooks. About 75 percent of cooks work in food services and drinking establishments, which include fast food restaurants, food courts, and full-service restaurants. The remaining 25 percent work in places such as hospitals, schools, and nursing homes. About two-thirds of cooks work full time and one-third work part time.

These data are from the National Compensation Survey. To learn more, see "Wages of Full-time and Part-time Cooks: A Multicity Tour" in Compensation and Working Conditions. In the survey, full- or part-time status is determined by whether the employer considers the employee to be working full time or part time, not on the number of hours worked. The national estimates for cooks in 2009 have an average reference month of July.