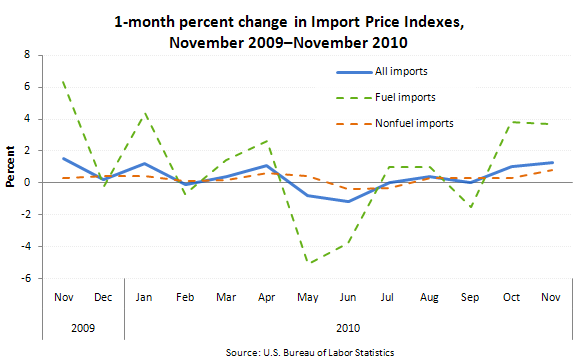 In November, fuel prices rose 3.7 percent after advancing 3.8 percent the previous month. The November increase was driven by a 4.1-percent rise in petroleum prices, which more than offset a 3.8-percent drop in natural gas prices.

Prices for nonfuel imports rose 0.8 percent following 0.3-percent advances in each of the three previous months. The November increase was the largest one-month advance for the index since a 1.1-percent rise in April 2008. Higher prices for nonfuel industrial supplies and materials were the largest factor for the overall increase in nonfuel prices. Increasing finished goods and food prices also contributed to the November advance. 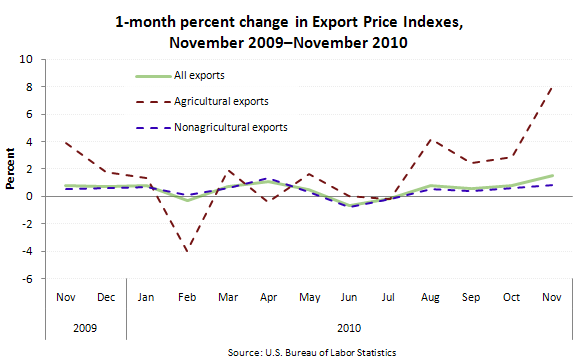 Export prices increased 1.5 percent in November, the largest monthly advance for the index since a 1.5-percent rise in July 2008. Prices for both agricultural and nonagricultural exports continued to move higher.

In November, prices for agricultural exports rose 8.0 percent, the largest one-month jump in the index since publication began on a monthly basis in December 1988. Higher prices for corn, cotton, soybeans, and wheat all contributed towards the increase in agricultural prices.

The price index for nonagricultural exports advanced 0.8 percent, the largest monthly increase since a 1.3-percent rise in April. Prices for both nonagricultural industrial materials and finished goods contributed to the November increase.