The Producer Price Index for Finished Goods rose 0.8 percent in November, seasonally adjusted. This increase followed a 0.4-percent advance in both October and September. 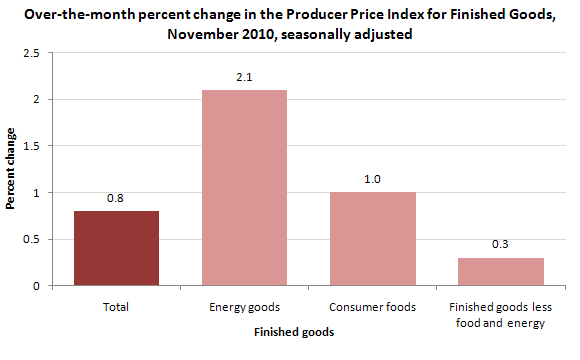 About two-thirds of the November advance in the finished goods index can be traced to prices for energy goods, which rose 2.1 percent—the fourth consecutive monthly increase.

The index for finished consumer foods advanced 1.0 percent in November, its fourth increase in the last five months. Over half of the November rise can be attributed to prices for fresh fruits and melons, which climbed 13.6 percent.

The index for finished goods less foods and energy moved up 0.3 percent in November, after declining 0.6 percent a month earlier. A 1.7-percent increase in prices for passenger cars led the advance in the finished core index.

These data are from the BLS Producer Price Index program. To learn more, see "Producer Price Indexes — November 2010" (HTML) (PDF), news release USDL-10-1725. All producer price indexes are routinely subject to revision once, 4 months after publication, to reflect the availability of late reports and corrections by respondents.