In 2009, 49 States and the District of Columbia reported the largest shares of their unemployed in the 15-weeks-or-longer category. Florida recorded the highest share among the States, 57.5 percent, followed closely by South Carolina, 57.4 percent, Michigan, 57.3 percent, and North Carolina, 57.2 percent. These States experienced some of the highest annual average unemployment rates in 2009. 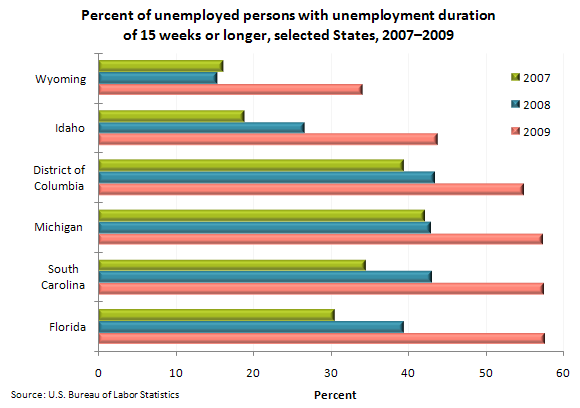 These data are from the Local Area Unemployment Statistics program. Those who are jobless for 15 weeks or more are referred to as long-term unemployed. To learn more, see "Duration of unemployment in States, 2007–09" (PDF) in the December 2010 issue of the Monthly Labor Review.