Over the last 12 months, the Consumer Price Index for All Urban Consumers (CPI-U) increased 2.1 percent before seasonal adjustment. 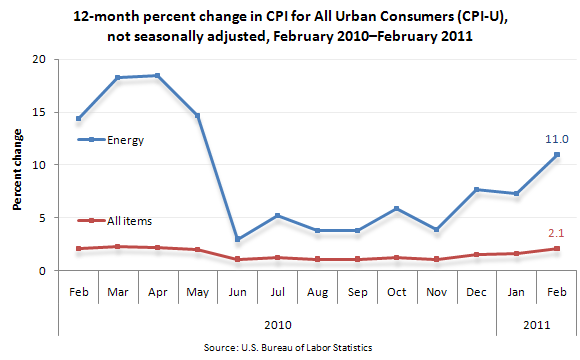 The 2.3-percent rise in the food index is the largest since May 2009. Over the past 12 months, the index for food at home has risen 2.8 percent while the food away from home index has risen 1.6 percent.

The 12-month increase in the index for all items less food and energy reached 1.1 percent in February after being as low as 0.6 percent in October 2010. The indexes for airline fares, medical care, new vehicles, and used cars and trucks were among the indexes that increased over that span; indexes that declined include household furnishings and operations, apparel, and recreation.