In February, Nevada continued to register the highest unemployment rate among the states, 13.6 percent. 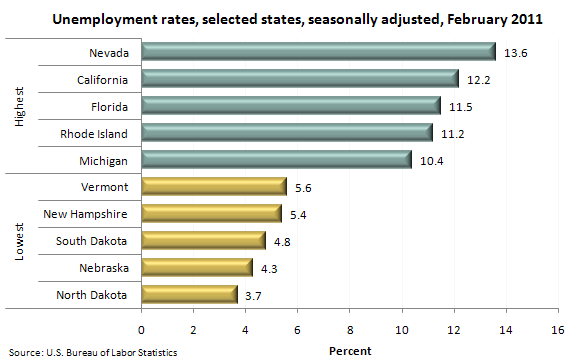 The states with the next highest rates were California, 12.2 percent, Florida, 11.5 percent, and Rhode Island, 11.2 percent. North Dakota reported the lowest jobless rate, 3.7 percent, followed by Nebraska and South Dakota, 4.3 and 4.8 percent, respectively.

In total, 22 states posted jobless rates significantly lower than the U.S. figure of 8.9 percent, 10 states recorded measurably higher rates, and 18 states and the District of Columbia had rates that were not appreciably different from that of the nation.

Sixteen states reported statistically significant over-the-year jobless rate decreases in February, the largest of which were in Michigan (−3.1 percentage points) and Illinois (−2.2 points). The remaining 34 states and the District of Columbia registered unemployment rates that were not appreciably different from those of a year earlier.

These data are from the Local Area Unemployment Statistics program and are seasonally adjusted. Data for the most recent month are preliminary. To learn more, see "Regional and State Employment and Unemployment — February 2011" (HTML) (PDF), news release USDL-11-0397.