The recent recession has had a profound effect on the length of successful job search. From 1994 through 2008, roughly half of all unemployed jobseekers found jobs within 5 weeks, compared with 38.9 percent in 2009 and 34.0 percent in 2010. 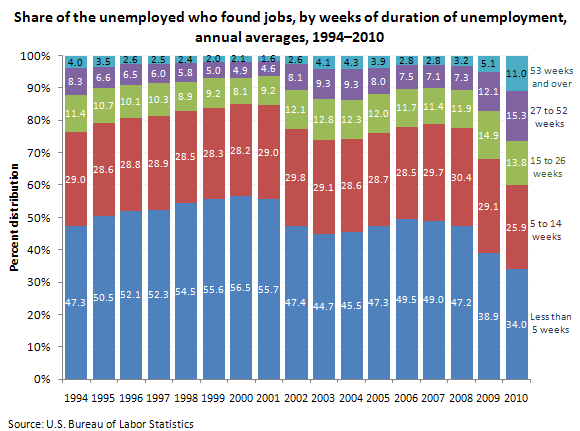 By the end of 2010, the median number of weeks jobseekers had been unemployed in the month prior to finding work was a little more than 10 weeks. In contrast, prior to the start of the recent recession in 2007, the median was 5 weeks.

During 2007, less than 3 percent of the unemployed who found work had been jobless for more than 52 weeks. In stark contrast, 11 percent of transitions from unemployment to employment exceeded a year in 2010.

These data are from the Current Population Survey and are not seasonally adjusted. Labor force status is determined for one week each month, usually during the survey reference week that contains the 12th day of the month. Since it is not possible to obtain information on the precise week between survey reference periods that unemployed individuals became employed or left the labor force, estimates of duration of unemployment are somewhat understated. To learn more, see How long before the unemployed find jobs or quit looking?, by Randy Ilg, Issues in Labor Statistics, May 2011.