Over the last 12 months (May 2010–May 2011), the Consumer Price Index for All Urban Consumers (CPI-U) increased 3.6 percent before seasonal adjustment. 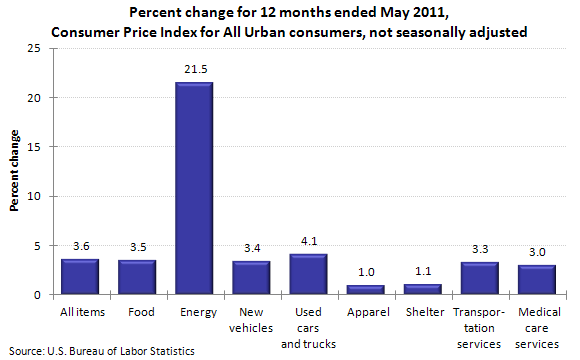 The food at home index has risen 4.4 percent since May 2010, with all major grocery store food groups posting increases. The household energy index has risen 2.9 percent over the same 12-month period, with the fuel oil index up 36.0 percent and the electricity index up 1.8 percent, but the index for natural gas down 1.2 percent.

The index for all items less food and energy increased 1.5 percent over the past 12 months, with virtually all of its major component indexes rising at a faster rate in the past 6 months than they did from May 2010 to November 2010.