In May 2011, unemployment rates in the United States were lower than a year earlier in 274 of the 372 metropolitan areas, higher in 85 areas, and unchanged in 13 areas. 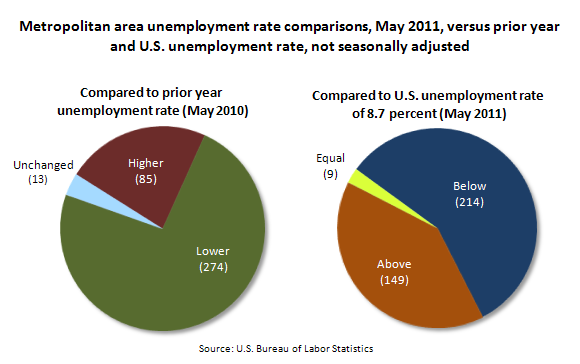 In May, a total of 214 areas recorded unemployment rates below the U.S. figure of 8.7 percent (not seasonally adjusted), 149 areas reported rates above it, and 9 areas had rates equal to that of the nation.

Ten areas recorded jobless rates of at least 15.0 percent in May, while 17 areas registered rates of less than 5.0 percent.

Of the 17 areas with jobless rates of less than 5.0 percent in May, about half were located in the West North Central census division. Bismarck, North Dakota, registered the lowest unemployment rate, 2.9 percent. The areas with the next lowest rates were Fargo, North Dakota-Minnesota, and Lincoln, Nebraska, 3.5 and 3.7 percent, respectively.