In June, the number of unemployed persons (14.1 million) and the unemployment rate (9.2 percent) were essentially unchanged over the month. 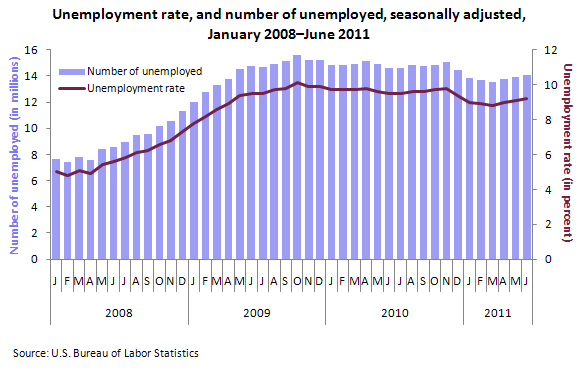 Since March, the number of unemployed persons has increased by 545,000, and the unemployment rate has risen by 0.4 percentage point. The labor force, at 153.4 million, changed little over the month.

In June, the number of persons unemployed for less than 5 weeks increased by 412,000. The number of long-term unemployed (those jobless for 27 weeks and over) was essentially unchanged over the month, at 6.3 million, and accounted for 44.4 percent of the unemployed.

The civilian labor force participation rate was little changed in June at 64.1 percent. The employment-population ratio decreased by 0.2 percentage point to 58.2 percent.

These data are from the Current Population Survey. To learn more, see "The Employment Situation—June 2011" (HTML) (PDF), news release USDL-11-1011.