In July, the employment-population ratio for youth—the proportion of the 16- to 24-year old civilian noninstitutional population that was employed—was 48.8 percent, a record low for the series, though only marginally lower than in July 2010. (The month of July typically is the summertime peak in youth employment.) 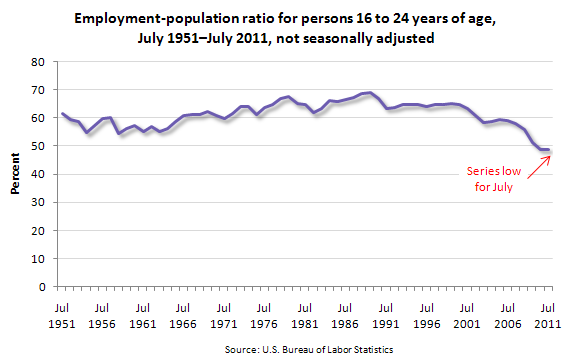 In July 2011, 18.6 million 16- to 24-year-olds were employed, about the same as last year. This summer's increase in youth employment—from April to July—was 1.7 million, down slightly from last summer (1.8 million).

Twenty-six percent of employed youth (4.8 million) worked in the leisure and hospitality sector (which includes food services), about the same as in July 2010. Another 21 percent (3.9 million) were employed in the retail trade industry, also about the same proportion as last year. 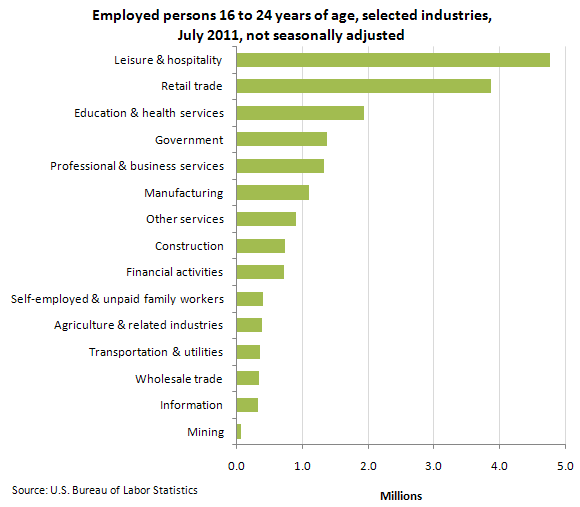 The number of unemployed youth in July 2011 was 4.1 million, down from 4.4 million a year ago. The youth unemployment rate declined by 1.0 percentage point over the year to 18.1 percent in July 2011, after hitting a record high for July in 2010.

These data are from the Current Population Survey. The data are not seasonally adjusted. To learn more about youth unemployment and employment, see "Employment and Unemployment Among Youth—Summer 2011" (HTML) (PDF), news release USDL 11-1246.