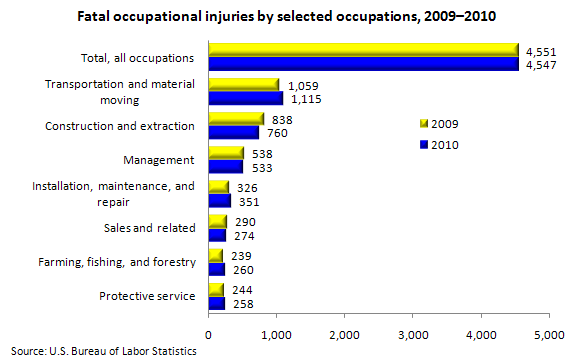 The number of fatal workplace injuries involving workers in transportation and material moving occupations was 1,115 in 2010, an increase of 5 percent from 2009. Workplace fatalities in this occupational group accounted for about one quarter of all such fatalities that occurred during the year.

The number of fatal work injuries in the construction and extraction occupations was 760 in 2010, a decline of 9 percent from 2009 and the lowest level since the series high reported in 2006. Construction trades worker fatalities were down 15 percent (from 621 in 2009 to 530 in 2010) and have declined 46 percent since 2006. Fatal work injuries involving construction laborers, the worker subgroup accounting for the highest number of fatalities in the construction trades worker group, were down by 16 percent in 2010.

These data are from the Census of Fatal Occupational Injuries (CFOI), which is part of the BLS Injuries, Illnesses, and Fatalities program. The CFOI compiles a count of all fatal work injuries occurring in the United States during a given calendar year. To learn more, see "National Census of Fatal Occupational Injuries in 2010 (Preliminary Results)" (HTML) (PDF), news release USDL 11-1247.