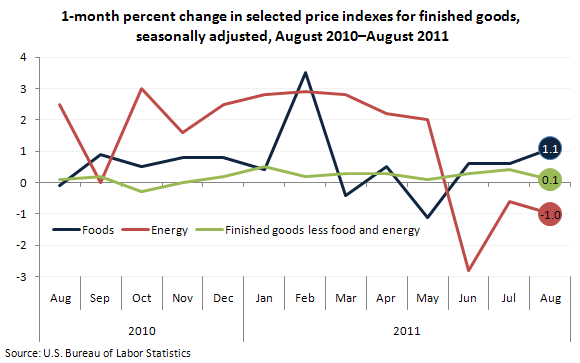 From July to August, over thirty percent of the advance in the index for finished consumer foods can be traced to meat prices, which climbed 2.4 percent. Higher prices for processed poultry and eggs for fresh use also were major factors in the increase in the finished foods index.

Over twenty percent of the increase in the index for finished goods less foods and energy from July to August is attributable to the index for tires, which climbed 1.4 percent. Higher prices for radio and television communication equipment also contributed to the rise in the finished core index.

These data are from the BLS Producer Price Index program. To learn more, see "Producer Price Indexes — August 2011" (HTML) (PDF), news release USDL-11-1326. All producer price indexes are routinely subject to revision once, 4 months after original publication, to reflect the availability of late reports and corrections by respondents.