From 2008 to 2009, among the largest 4-digit NAICS manufacturing industries (those with employment over 200,000), multifactor productivity—defined as output per unit of combined inputs—rose only in electronic instruments, with all of the other large industries showing declines. 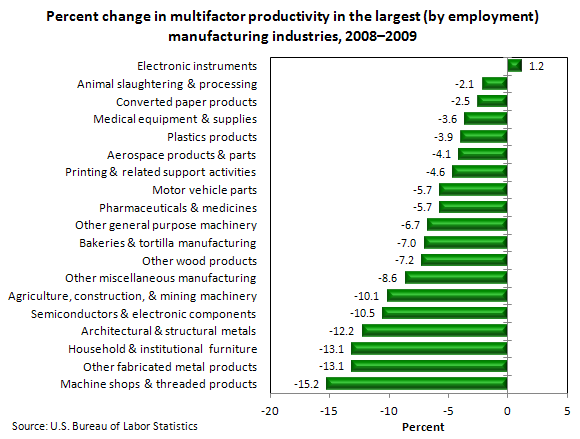 Among the largest manufacturing industries, the largest decline in multifactor productivity from 2008 to 2009 was in machine shops and threaded products. The semiconductors and electronic components industry experienced its first decline since 1987, when the series began.

These data are from the Multifactor Productivity program. To learn more, see "Multifactor Productivity Trends for Detailed Industries, 2009," news release USDL-11-1376 (HTML) (PDF). Multifactor productivity growth measures the extent to which output has grown faster than measured inputs and reflects the joint influences on economic growth of a number of factors, including technological change, returns to scale, improved skills of the workforce, better management techniques, or other efficiency improvements.