Annual mean wages by occupational group ranged from $21,240 for food preparation and serving related occupations to $105,440 for management occupations. 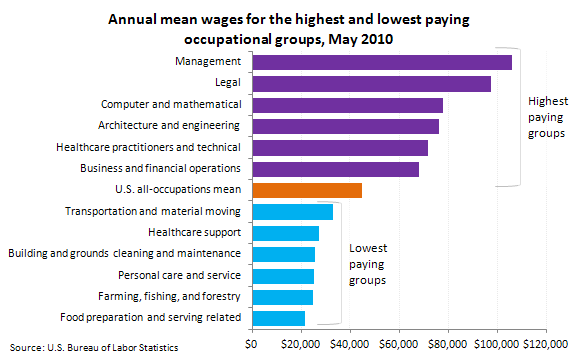 Nearly every management occupation had an average wage above the U.S. all-occupations mean of $44,410, while nearly all food preparation and serving related occupations had an annual mean wage of less than $25,000.

Although healthcare practitioners and technical occupations included some of the highest paying individual occupations, this group also included occupations with more moderate wages, such as dietetic technicians ($28,820).

Among the low-paying occupational groups, transportation and material moving had the highest paying individual occupations, including air traffic controllers ($110,280). However, the largest occupation in this group— laborers and hand freight, stock, and material movers—had an average wage of $25,710.