In 2010, the Nation's 11.2 million Asians accounted for 4.7 percent of the U.S. civilian noninstitutional population ages 16 and older. 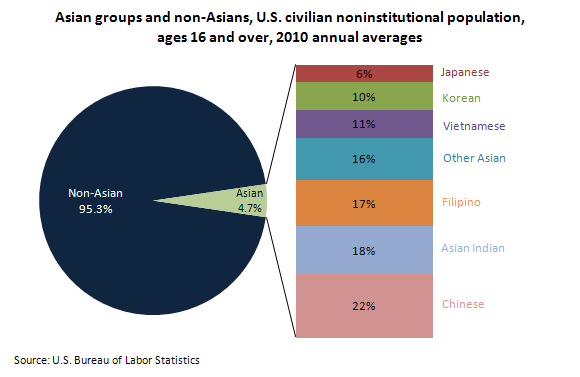 The largest Asian group in 2010 were the Chinese, making up 22 percent of all Asians. Next came Asian Indians, who made up 18 percent, followed by Filipinos (17 percent), Vietnamese (11 percent), Koreans (10 percent), and Japanese (6 percent). The remainder—16 percent—were classified as Other Asians.

Occupational employment patterns differ across the Asian groups. In the 2008–2010 period, Asian Indians were the most likely to work in professional and related occupations (49 percent). This includes about 22 percent of Asian Indians who worked in computer and mathematical occupations. 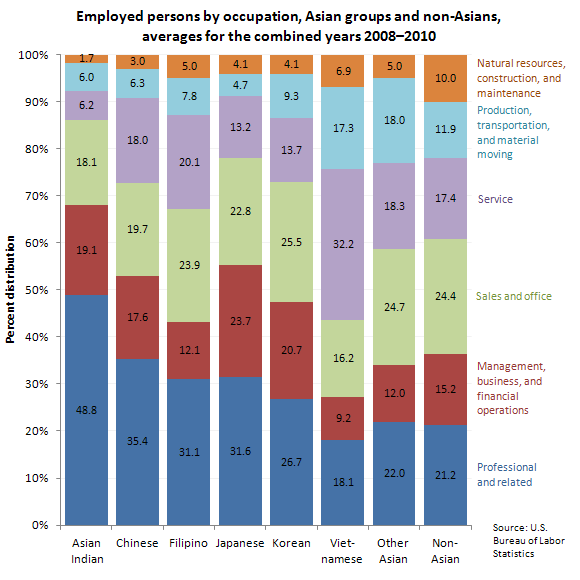 Data for this article are from the BLS Current Population Survey program. Other Asians include individuals who were of an Asian group not listed as well as those who were of two or more Asian groups. To learn more, see "Asians in the U.S. labor force: profile of a diverse population," by Mary Dorinda Allard, in the November 2011 issue of the Monthly Labor Review.