Employment and wage trends in high-tech industries in Massachusetts 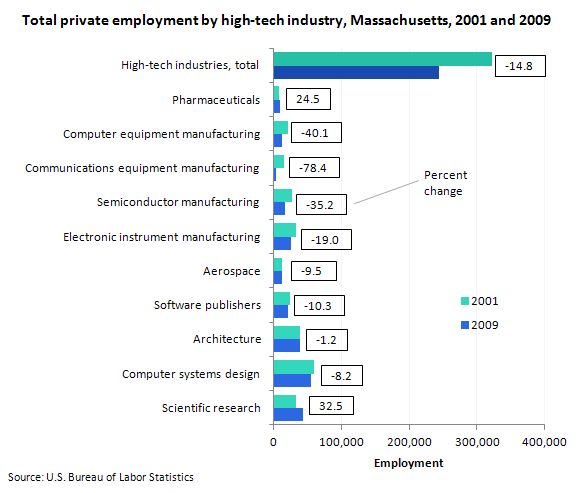 Unlike employment in scientific research, employment in computer systems design declined by 8.2 percent from 2001 to 2009, a loss of 4,928 jobs. However, over the same period, workers' average wages increased by 27.8 percent to $115,353. 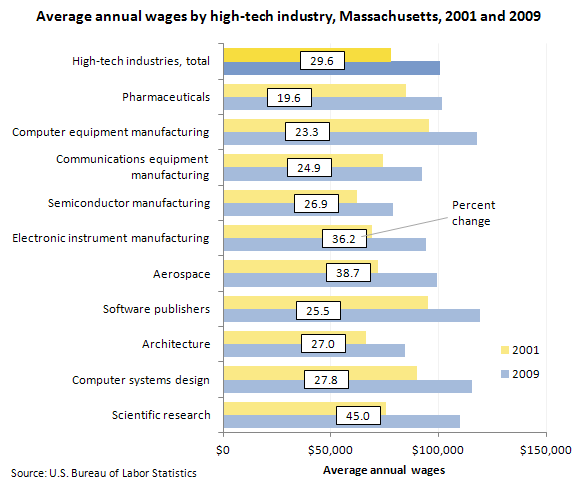 High-tech jobs require high-level skills to perform technology-oriented work. In 2001, the annual wage of a high-tech worker in Massachusetts averaged $77,314; average wages in the high-tech industries increased by 29.6 percent from 2001 to 2009.

These data are from the Quarterly Census of Employment and Wages (QCEW) program and the Occupational Employment Statistics (OES) program. To learn more, see the Regional Report High-tech Industries in Massachusetts: Employment and Wage Trends during the 2001–2009 Period (PDF). The 2009 QCEW employment data referenced are final, annual average data. OES employment and wage data are for May 2009. For this report, industries have been identified as "high tech," using the 2007 North American Industry Classification System (NAICS) codes.