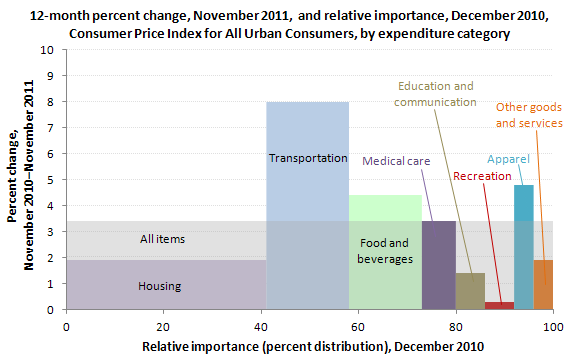 The housing index (which has a relative importance of 41.5 percent) increased 1.9 percent from November 2010 to November 2011. The 12-month change in the shelter index (the largest housing component) has been steadily increasing and reached 1.8 percent in November. The household energy index has risen 3.1 percent over the past year, with the fuel oil index up 25.0 percent, the electricity index up 2.7 percent, but the natural gas index down 1.3 percent.

The 12-month change in the medical care index (which has a relative importance of 6.6 percent) was 3.4 percent, its highest level in over a year.

The apparel index (with a relative importance of 3.6 percent) has risen 4.8 percent over the last 12 months, the largest figure since 1991.

These data come from the BLS Consumer Price Index program. To learn more, see "Consumer Price Index — November 2011" (HTML) (PDF), news release USDL-11-1748. The relative importance of a component is its expenditure or value weight expressed as a percentage. When the value weights are collected, they represent average annual expenditures, and their relative importance ratios show approximately how the index population distributes expenditures among the components.