In 2011, there were 19 major strikes and lockouts involving 1,000 or more workers lasting at least one shift. These work stoppages idled 113,000 workers for 1.02 million lost workdays. 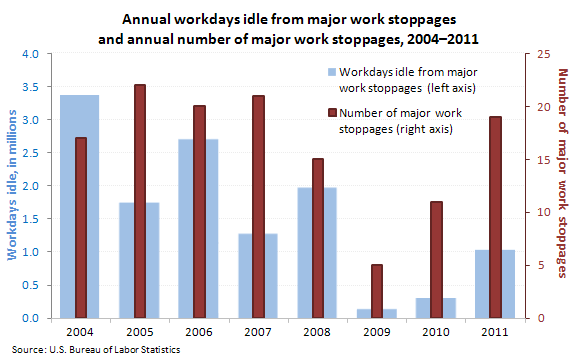 The longest work stoppage beginning in 2011 was between American Crystal Sugar Company and the Bakery, Confectionary, Tobacco Workers and Grain Millers, Sugar Council. The ongoing work stoppage began in August and has lasted through the remainder of 2011 (105 workdays) with 1,300 workers accounting for 136,500 lost workdays.

The largest work stoppage in 2011 in terms of number of workers and total workdays idle was between Verizon Communications and the Communications Workers of America and the International Brotherhood of Electrical Workers, with 45,000 workers accounting for 450,000 lost workdays.