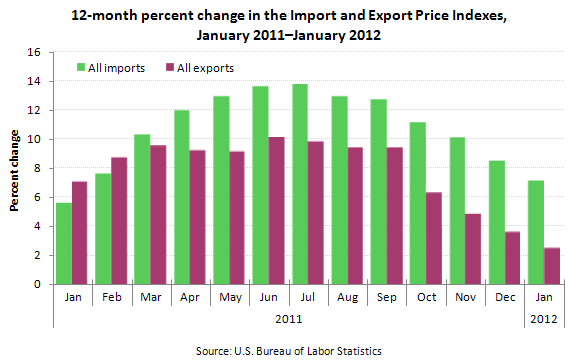 Fuel prices increased 20.8 percent for the year ended in January, led by a 23.7 percent advance in petroleum prices, the largest component of import fuels, which more than offset a 22.5 percent decline in the price index for natural gas. Prices for nonfuel imports increased 2.9 percent over the past year.

Export prices advanced 2.5 percent for the year ended in January, the smallest year-over-year increase since a 0.4 percent rise between November 2008 and November 2009. Agricultural prices fell 1.0 percent over the last 12 months as lower prices for soybeans, cotton, and wheat more than offset rising prices for meat, vegetable, and corn.

The price index for nonagricultural exports increased 3.0 percent for the January 2011-12 period, as price increases for nonagricultural industrial supplies and materials, and each of the major finished goods categories all contributed to the advance.