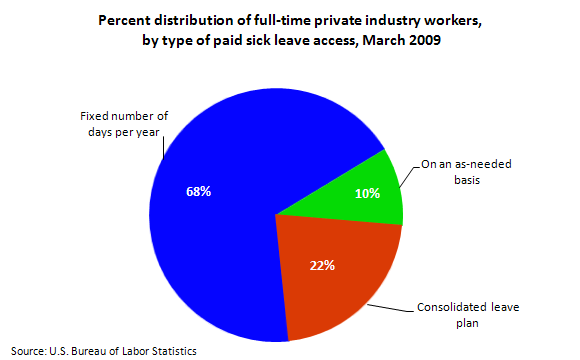 Paid sick leave benefits allow workers to take time off for illness and have been shown to help increase worker productivity and reduce the spread of disease within a company and community. Although there is no federal legal requirement that employers provide paid sick leave benefits to their employees, 73 percent of full-time private industry workers in the United States were provided such benefits in 2009.

These data are from the March 2009 National Compensation Survey. Consolidated leave plans combine multiple forms of leave into one plan, such as providing employees with 4 weeks of leave for vacation and illness or disability, which they can allocate as they choose. Plans that grant employees leave on an as-needed basis are less formal and found mostly in establishments with fewer than 50 employees. To learn more, see "Paid Sick Leave: Prevalence, Provision, and Usage among Full-Time Workers in Private Industry" in the February issue of Compensation and Working Conditions Online.