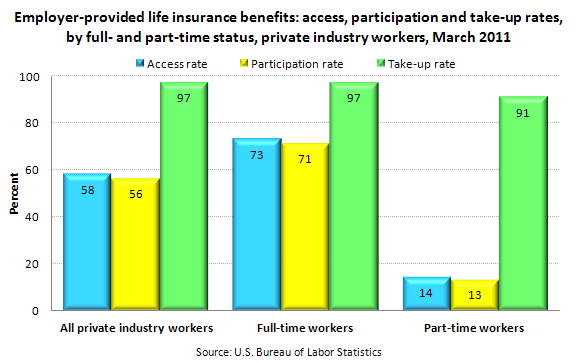 When participation rates of workers in the lowest and the highest quartiles of earnings are compared, the difference is also significant, with 22-percent and 80-percent participation rates, respectively, in the two categories. The workers' earnings also affect the requirement to contribute to the cost of coverage for life insurance: only 4 percent of high-wage earners were required to contribute for life insurance coverage, while 10 percent of the lowest wage earners were in contributory plans.

In 2011, 95 percent of private industry employees with basic life insurance coverage were in plans that used one of two methods of benefit payments: flat dollar amount formulas and fixed multiple of annual earnings formulas. Other methods of payment exist, but they are uncommon; combined, they accounted for about 5 percent of the employees participating in a life insurance plan.