The Bureau of Labor Statistics has two monthly surveys that measure employment levels and trends: the Current Employment Statistics survey, also known as the payroll or establishment survey, and the Current Population Survey, also known as the household survey. Employment estimates from both surveys are published in the Employment Situation news release each month. These estimates differ because the surveys have distinct definitions of employment and distinct survey and estimation methods. Both surveys are needed for a complete picture of the labor market. The payroll survey provides a highly reliable gauge of monthly change in nonfarm payroll employment. The household survey provides a broader picture of employment, including agriculture and the self-employed. 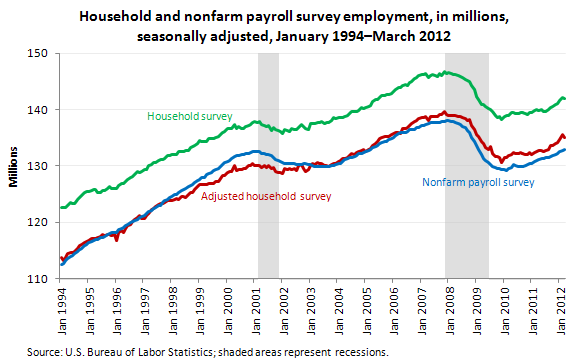 The adjusted household survey employment tracks much more closely with the payroll survey, but occasional differences in trends occur. For example, from the late 1990s until the 2001 recession, payroll employment grew at a faster rate than adjusted household survey employment. Even when the surveys track each other fairly closely over the longer term, differences are common over short periods such as a month or a few months.

These data are from the Current Employment Statistics and Current Population Survey programs and are seasonally adjusted. Payroll employment data for the most recent two months are preliminary. To learn more, see "Comparing employment from the BLS household and payroll surveys."