In June, there was no change in the seasonally adjusted Consumer Price Index for All Urban Consumers. Over the last 12 months, the all items index has increased 1.7 percent before seasonal adjustment. 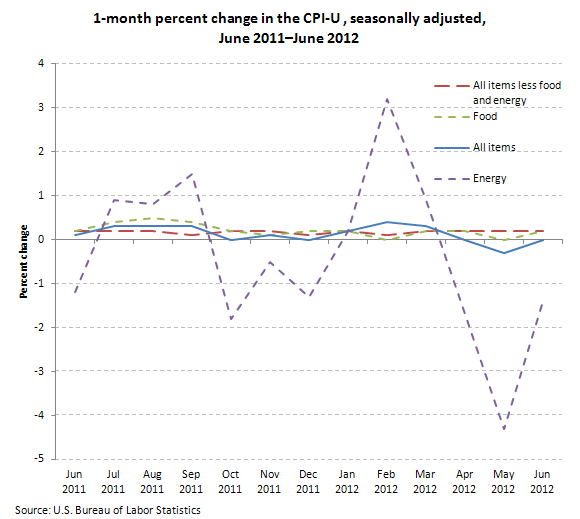 The energy index declined 1.4 percent in June, following declines of 1.7 percent in April and 4.3 percent in May. The gasoline, fuel oil, and electricity indexes all fell in June, falling 2.0 percent, 7.9 percent, and 0.5 percent, respectively. In contrast to these declines, the index for natural gas turned up in June, rising 1.7 percent after declining 4.1 percent in May.

The index for all items less food and energy increased 0.2 percent in June, the fourth straight such increase. Over the last 12 months, the index has risen 2.2 percent, a slight decrease from the 2.3 percent figure of March, April and May, but still above the 1.9-percent average annualized increase for the past ten years.