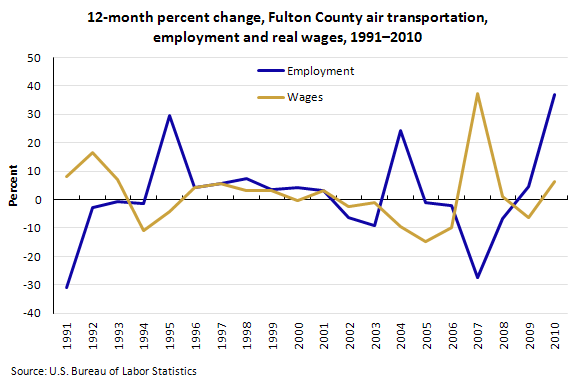 For Fulton County, several factors have contributed to changes in employment over the 20-year period, including three recessions: July 1990–March 1991; March 2001–November 2001; and December 2007–June 2009. The air transportation industry is sensitive to declines in economic activity as individuals and businesses tend to scale back travel during recessions. 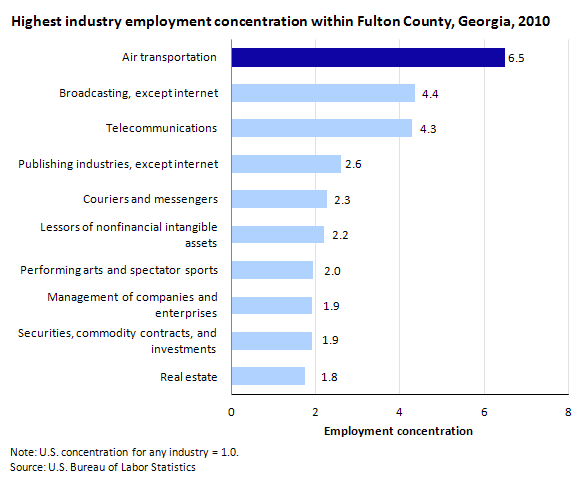 Air transportation's share of total employment, or employment concentration, is more than 6 times greater in Fulton County than it is in the United States. The industry's rising profile in the Atlanta area is due in part to several capacity-adding construction projects at Hartsfield-Jackson Atlanta International, the world's busiest airport.

These data are from the Quarterly Census of Employment and Wages (QCEW) program. The employment concentration of an industry for different areas shows whether the employment share of an industry in the local economy is greater or less than that in the United States as a whole. To learn more, see "Atlanta's thriving air transportation industry: employment and wages, 1990–2010" (HTML) (PDF), Beyond the Numbers vol. 1, no. 10, August 2012.