Consumer prices up in August 2012

Over the last 12 months, the Consumer Price Index for All Urban Consumers (CPI-U) increased 1.7 percent before seasonal adjustment. 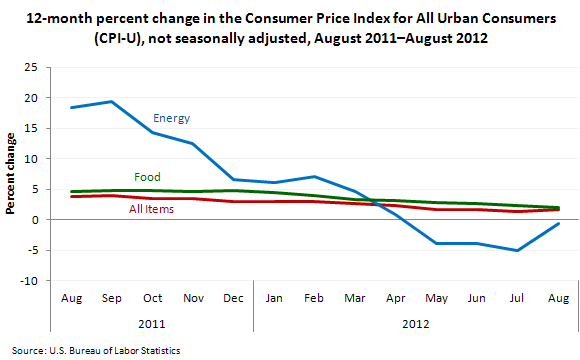 The energy index, which had declined in each of the 4 previous months, rose 5.6 percent in August, its largest increase since June 2009. The gasoline index accounted for most of the increase, rising 9.0 percent. However, the other major energy indexes, which had all declined in July, increased as well. Over the last 12 months the energy index has declined 0.6 percent.

The food index rose 0.2 percent in August after a 0.1-percent increase in July. This index has risen 2.0 percent over the past 12 months.

The index for all items less food and energy increased 0.1 percent in August, the same increase as in July. This index has risen 1.9 percent over the past 12 months, but it has been trending down slightly since its recent peak of 2.3 percent in March, April, and May.