In January 2012, the median number of years that wage and salary workers had been with their current employer was 4.6—higher than the median tenure (4.4 years) in January 2010.

Median employee tenure varied by age. Older workers tend to have more years of tenure than their younger counterparts. For example, the median tenure for employees age 65 and over was 10.3 years in January 2012, over three times the tenure for workers age 25 to 34 (3.2 years).

Wage and salary workers in the public sector had almost double the median tenure of private sector employees in January 2012, 7.8 versus 4.2 years. The longer tenure among workers in the public sector is explained, in part, by the age profile of government workers. About three in four government workers were age 35 and over, compared with about three in five private wage and salary workers. 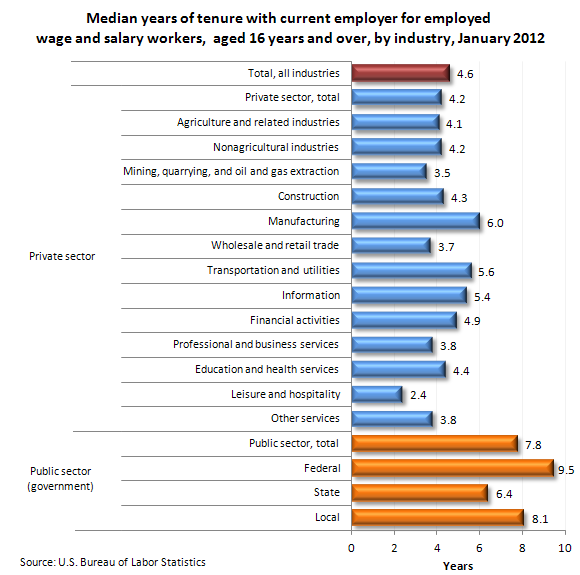 Twenty-one percent of all wage and salary workers age 16 and over had a year or less of tenure with their current employer in January 2012. This short-tenured group of workers includes new entrants and reentrants to the labor force, job losers who found new jobs during the previous year, and workers who had voluntarily changed employers during the previous year. 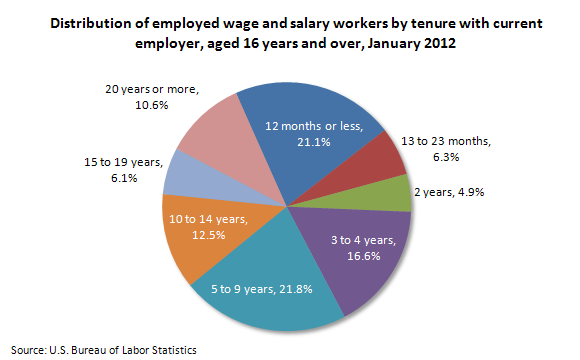 These data come from the BLS Current Population Survey (CPS) program. Information on employee tenure has been obtained from supplemental questions to the CPS every 2 years since 1996. Median employee tenure is the point at which half of all workers had more tenure and half had less tenure. To learn more, see "Employee Tenure — January 2012" (HTML) (PDF), news release USDL-12-1887.