Average annual expenditures per consumer unit rose 3.3 percent in 2011, the first yearly increase in spending since the 1.7-percent rise from 2007 to 2008. The rise in spending in 2011 barely outpaced the 3.2-percent increase in prices for goods and services from 2010 to 2011, as measured by the average annual change in the Consumer Price Index (CPI-U).

All major components of household spending increased in 2011. The 8.0-percent rise in transportation spending was the largest percentage increase among all major components. Overall spending on food and cash contributions (including payments for support of college students, alimony and child support, and giving to charities and religious organizations) both increased by 5.4 percent. Other spending highlights include a 4.9-percent rise in health care spending, and modest increases in housing (+1.5 percent), apparel and services (+2.4 percent), entertainment (+2.7 percent), and personal insurance and pensions (+0.9 percent). 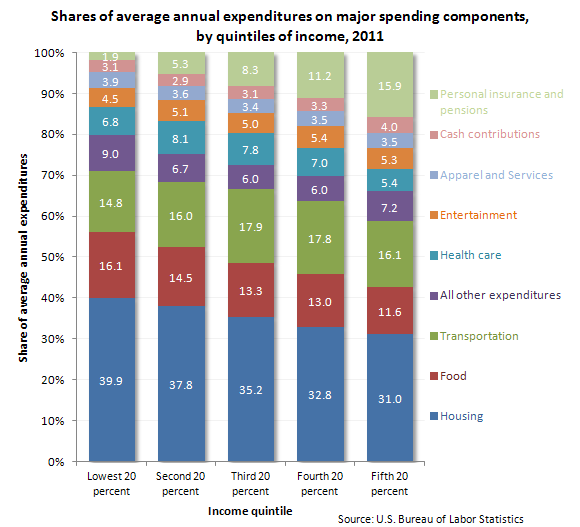 Among consumers in all quintile groups, no clear trend existed for the shares allocated to transportation, health care, entertainment, and apparel and services in 2011.