A more rigorous high school math curriculum is associated with a higher probability of attending college. This positive association grew stronger between the 1970s and 2000s. College attendance increased markedly during this period. (College attendance is defined here as having been enrolled in college by age 21.) The college enrollment rate increased from 53 percent among those born in 1957–1964 to 67 percent among those born in 1980–1984. 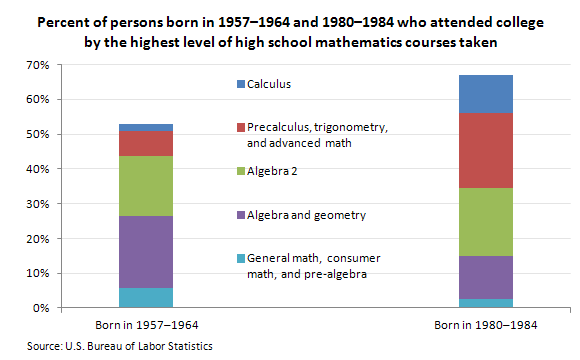 These data are from the National Longitudinal Surveys program. To learn more, see "A comparison of college attendance and high school coursework from two cohorts of youth" (HTML) (PDF), by Alison Aughinbaugh in Beyond the Numbers, volume 1, number 14, October 2012.