Veterans in the civilian labor force, 2011

In 2011, 21.6 million men and women in the civilian noninstitutional population ages 18 and over were veterans. About 11.3 million veterans were in the U.S. civilian labor force. Veterans are defined as men and women who have previously served on active duty in the U.S. Armed Forces and who were civilians at the time of the survey. 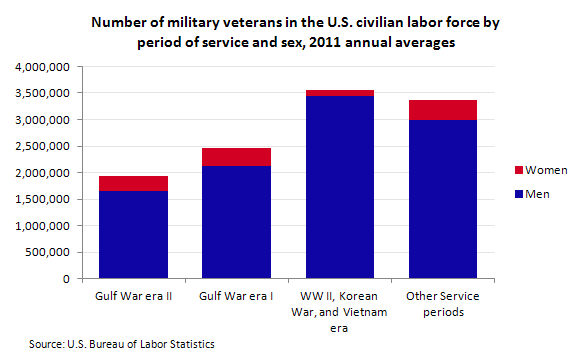 In 2011, about 2.4 million of the nation's veterans had served during Gulf War era II (defined as veterans who served anywhere in the world at any time since September 2001). About 17 percent of these veterans were women, compared with 3 percent of veterans from World War II, the Korean War, and the Vietnam era. About half of all Gulf War-era II veterans were between the ages of 25 and 34. 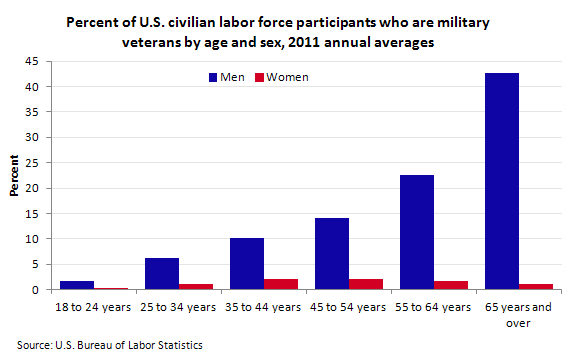 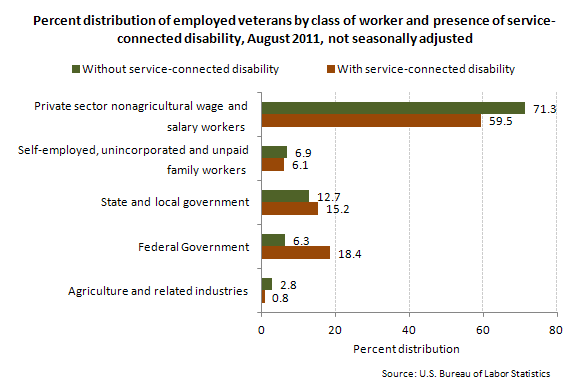 These data are from the Current Population Survey, a monthly survey of households that provides information on employment and unemployment in the United States. For more information, see "Employment Situation of Veterans — 2011" (HTML) (PDF), news release USDL-12-0493.

Veterans could have served anywhere in the world during these periods of service: Gulf War era II (September 2001-present), Gulf War era I (August 1990-August 2001), Vietnam era (August 1964-April 1975), Korean War (July 1950-January 1955), World War II (December 1941-December 1946), and other service periods (all other time periods). Veterans are counted in only one period of service, their most recent wartime period. Veterans who served in more than one wartime period are classified in the most recent one. Veterans who served in both a wartime period and any other service period are classified in the wartime period.