Impact of the 2012 drought on export corn prices

In the summer of 2012, weather conditions caused the most severe drought the United States has seen since the 1950s. As a result of drought-related crop damage, U.S. export prices for corn soared nearly 128 percent above the 20-year historical average. Export prices also hit the highest level since the BLS import and export price index series began in 1984. 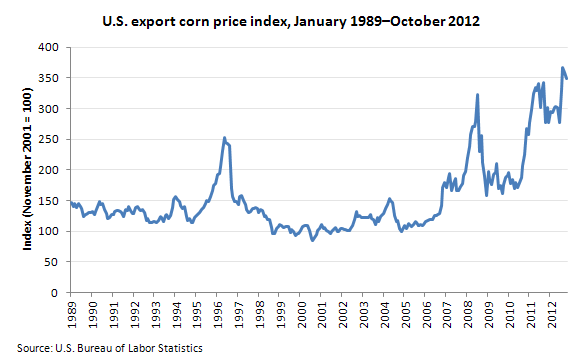 Drought conditions affected approximately 80 percent of U.S. agricultural land in the summer of 2012. Export corn prices rose 32.5 percent from June to August 2012 as drought conditions worsened. This rise coincided with a 13-percent decrease in corn supplies from the previous year, and beginning stocks following the 2011 season were already low. The export corn price index finished the third quarter of 2012 with a 29.8-percent gain. That was the largest quarterly rise in the index since a 30.5-percent advance during the first quarter of 2008.

Droughts in the United States are not unprecedented. Most recently, the nation experienced droughts in 1988 and 1995. The 1988 drought resulted in a 30-percent drop in corn production that year, and export corn prices surged 31.4 percent in the third quarter. With relatively small beginning corn stocks leading into the 1995 drought, export corn prices rose 45.2 percent overall for the year.

These data are from the BLS International Price program. To learn more, see "Impact of the drought on corn exports: paying the price" (HTML) (PDF), by Will Adonizio, Nancy Kook, and Sharon Royales in Beyond the Numbers, volume 1, number 17, November 2012.