In 2011, employers initiated 6,597 extended mass layoff events that resulted in the separation of 1.1 million workers, the lowest level of separations since 2007. 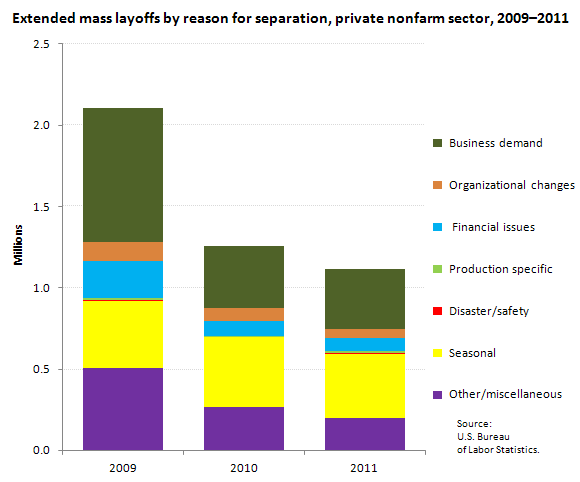 Separations resulting from low business demand, organizational changes, financial issues, seasonal business decline, and other/miscellaneous reasons all continued to decline from 2009 to 2011. Within business demand, the number of workers separated because of slack work/insufficient demand decreased from 161,769 in 2010 to 94,757 in 2011, the largest decline among all economic reasons for layoff from 2010 to 2011.

Separations resulting from production specific and disaster/safety reasons increased in 2011 after declining from 2009 to 2010.

These data are from the Mass Layoff Statistics program. For more information, see “Extended Mass Layoffs in 2011” Report 1039, issued December 2012. The series on extended mass layoffs cover layoffs of at least 31-days duration that involve 50 or more individuals from a single employer filing initial claims for unemployment insurance during a consecutive 5-week period.