Minimum wage workers tend to be young. Although workers under age 25 represented only about one-fifth of hourly paid workers, they made up about half of those paid the federal minimum wage or less. Among employed teenagers paid by the hour, about 21 percent earned the minimum wage or less, compared with about 3 percent of workers age 25 and over.

The industry with the highest proportion of workers with hourly wages at or below the federal minimum wage was leisure and hospitality (about 19 percent). About half of all workers paid at or below the federal minimum wage were employed in this industry, the vast majority in restaurants and other food services. For many of these workers, tips and commissions supplement the hourly wages received. 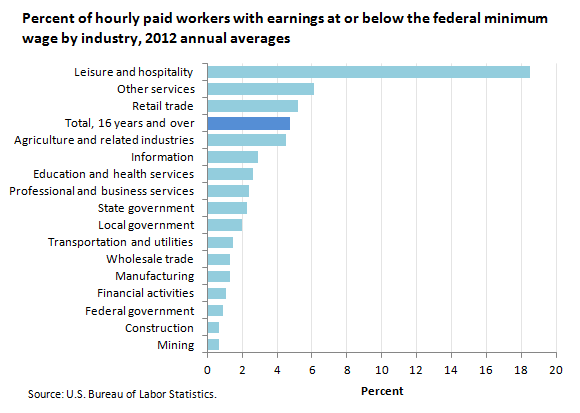 These data are from the Current Population Survey. For more information, see “Characteristics of Minimum Wage Workers: 2012” (HTML) (PDF). Data are for wage and salary workers age 16 and over and refer to earnings on a person's sole or principal job. Hourly earnings for hourly paid workers do not include overtime pay, commissions, or tips received. The estimates of the numbers of minimum and subminimum wage workers pertain to workers paid at hourly rates; salaried and other workers are excluded. All self-employed persons also are excluded, regardless of whether their businesses are incorporated.