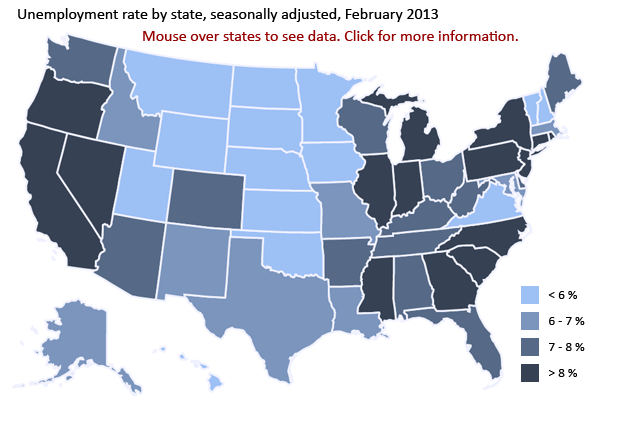 California, Mississippi, and Nevada had the highest unemployment rates among the states in February, 9.6 percent each. North Dakota again had the lowest jobless rate, 3.3 percent. In total, 22 states had jobless rates significantly lower than the U.S. figure of 7.7 percent, 11 states had measurably higher rates, and 17 states and the District of Columbia had rates that were not appreciably different from that of the nation.

Four states had statistically significant over-the-month unemployment rate declines in February: Rhode Island (-0.4 percentage point), Vermont (-0.3 point), and California and New Jersey (-0.2 point each). Two states had significant rate increases over the month: Illinois (+0.5 percentage point) and Wisconsin (+0.2 point). The remaining 44 states and the District of Columbia had jobless rates that were not measurably different from those of a month earlier, though some had changes that were at least as large numerically as the significant changes.

Nevada had the largest jobless rate decline from February 2012 (-2.2 percentage points). Seven additional states had smaller but also statistically significant decreases over the year: Florida and Idaho (-1.3 percentage points each); California (-1.2 points); Colorado and Hawaii (-1.0 point each); Washington (-0.9 point); and Texas (-0.7 point). The remaining 42 states and the District of of Columbia had unemployment rates that were not appreciably different from those of a year earlier.

These data are from the Current Employment Statistics (State and Metro Area) program. Data for the most recent month are preliminary and subject to change. To learn more, see “Regional and State Employment and Unemployment — February 2013” (HTML) (PDF), news release USDL-13-0544.