For the 12-month period from March 2012 to March 2013, the Producer Price Index for finished goods increased 1.1 percent, not seasonally adjusted, the smallest year-over-year advance since a 0.5-percent rise in July 2012. 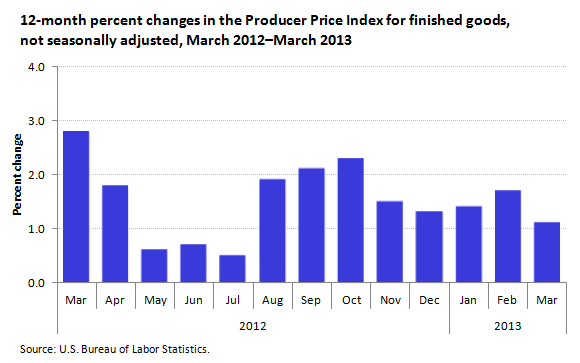 At the earlier stages of processing, prices for intermediate materials, supplies, and components declined 0.8 percent for the 12 months ended in March, the largest over-the-year decrease since a decline of 1.0 percent in August 2012. Prices for crude goods edged down 0.3 percent from March 2012 to March 2013.

These data are from the BLS Producer Price Index program. To learn more, see "Producer Price Indexes — March 2013" (HTML) (PDF), news release USDL-13-0629. All producer price indexes are routinely subject to revision once, 4 months after original publication, to reflect the availability of late reports and corrections by respondents.