In March 2013, about three-quarters of all workers in private industry and state and local government had access to paid holidays and paid vacations (76 percent and 74 percent, respectively), while roughly two-thirds had access to paid sick leave (65 percent). 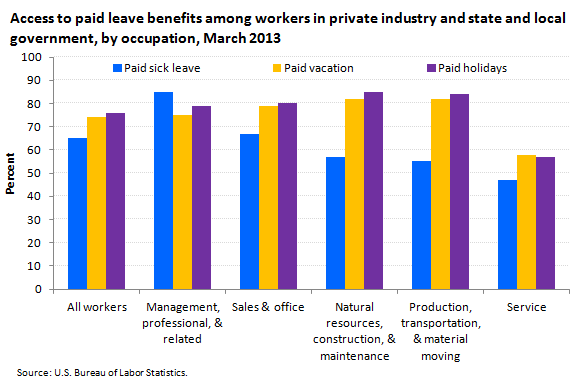 The proportion of management, professional, and related workers who received paid sick leave (85 percent) was larger than the proportion that received paid holidays and paid vacations (79 percent and 75 percent, respectively).  Among other occupation groups—sales and office; natural resources, construction and maintenance; production, transportation, and material moving; and service occupations—the reverse was true: the percentage of workers who received paid sick leave was smaller than the percentage with paid vacations and paid holidays.