While the volume of petroleum imports to the United States started to decline as early as 2006 and domestic production began increasing in 2009, the price index for imported petroleum continued to rise until 2012. 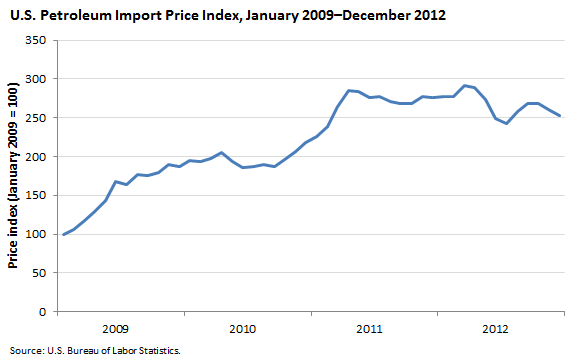 Several factors helped keep import prices rising until 2012. Strong global demand, especially from Asia; lower production from several nations that are members of the Organization of the Petroleum Exporting Countries (OPEC); and global supply shocks all contributed to increasing prices. By 2012, the growth in production worldwide, coupled with steadying global demand, started to drive prices down.

In 2010, import prices for petroleum rose 28.4 percent over the 2009 figure, on the strength of robust global demand. Demand from Asia was particularly strong. Much of the increase in consumption came from China, which experienced record demand during the year.

The rise in import petroleum prices in 2011 (36.4 percent) was even more pronounced. Supply concerns resulting from political unrest in North Africa and strong worldwide demand contributed to the higher prices. The political unrest began with protests against the Egyptian government and continued with a civil war that broke out in neighboring Libya, producing uncertainty that contributed to a worldwide rise in petroleum prices. Strong demand from Asian countries continued in 2011.

After 2 consecutive years of sizable increases, import prices leveled off in 2012, falling 0.3 percent for the year.

These data are from the International Price program and are featured in the Beyond the Numbers article, "The reemergence of the United States as a global petroleum producer" (August 2013).